Become a millionaire in one day 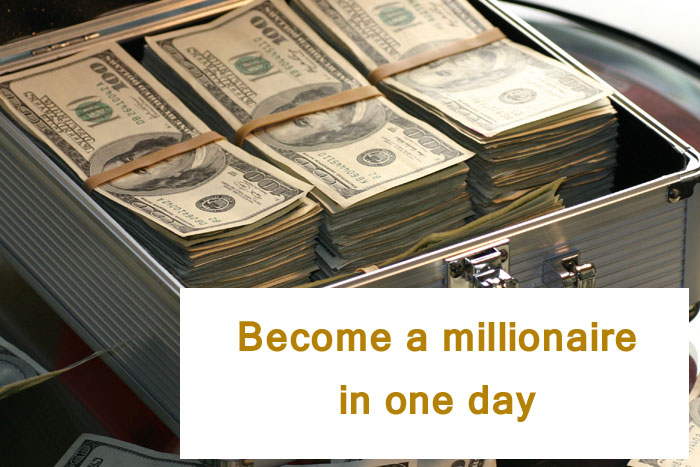 However, even those few instances where it might be technically possible to become a millionaire within a day have little chance of occurring.

Most people assume that winning the lottery is their best chance to become a millionaire in a day. Powerball themselves admit that it is possible, but the odds of winning a million-dollar lottery are 1 in 292.2 million.

Let's assume that you are watching a match in a stadium where the seating capacity is around 100 thousand, and a multimillion-dollar lottery is to be drawn for a lucky winner among the audience. There is virtually no chance you will win this multimillion-dollar jackpot once it is drawn from a ticket at this stadium.

And, it would be like choosing a winner from 2000 such stadiums to win the Powerball jackpot. It usually isn't a done deal if that makes any sense. The occasional truly extraordinary story does indeed exist. You might have read about some fortunate people who won multi-million jackpots and became millionaires in one day.

You could definitely use an amount like this to make yourself feel rich, but you wouldn't be a millionaire from it.

Of course, there are stories about a long-lost relative that left someone millions of dollars they never knew about. However, these types of incidents are exceedingly rare, but you can indeed become a millionaire in one day if you are lucky enough.

3. Windfalls from other sources

It is rare to find someone who became a millionaire in one day due to some windfall. These windfalls are usually achieved after years of legal battles or significant investment and aren't necessarily overnight successes.

Here are some examples


All of this information we've shared with you should have led you to believe that you can become a millionaire in one day if you choose the right strategy and your luck shines upon you. We'd love to hear what you have to say in the comments section.